The Aston Stealth is a revolutionary, broadcast quality, microphone for studio and stage. With 4 switchable voices delivering unparalleled performance in almost any situation, a Class A built in mic preamp with autodetect 48V Phantom power (a world’s first!) and featuring a unique Sorbothane internal shock mount system and Aston’s legendary build quality, we reckon Stealth is the world’s most versatile microphone.

Stealth was developed in partnership with 92 top engineers, producers and artists (the Aston 33 development panel) who participated in a series of blind listening tests designed to create the best possible sound… the resulting four voice settings, Vocal 1, Vocal 2, Guitar and Dark, offer a range of world class sounds to suit almost every application. 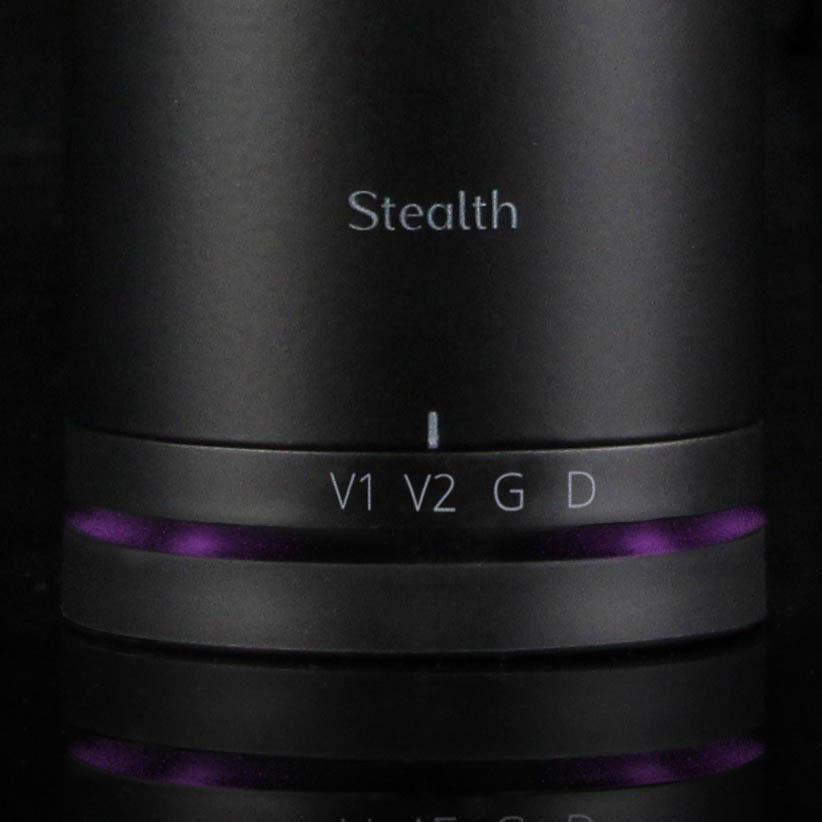 Stealth was developed in conjunction with more than 90 top engineers, producers and artists and the results of extensive blind listening tests revealed that in order to truly excel across a range of sound sources. Stealth had to break quite a few traditional mic design rules.

Think of Stealth as four professional mics in one. Some inexpensive mics use flattering pre-EQ which may sound great in the music store but makes professional post-processing pretty much impossible. Each of Stealth’s four voices are discreet and pure signal paths giving world-class results.

The four voices are:

V1 (Vocal 1): This was voted top in blind testing for a range of male vocal takes, regardless of the pitch of the singer.

V2 (Vocal 2): This setting came top for a range of female vocal takes. As with V1 this was more to do with timbre than pitch (see below).

G (Guitar): At home on anything from Spanish guitar through to raucous guitar cabs!

It’s important to note that V1 and V2 test panel preferences for male and female vocal takes respectively was little to do with the pitch of the singers and therefore can only be explained with reference to physical characteristics (vocal cords in particular) producing timbral differences. These results, while absolutely clear in double-blind tests, don’t mean that you should only check out one setting for your own voice…  different settings should always be tried to find the best results.

Stealth works with or without 48V phantom power and is the world’s first microphone to feature an Autodetect function which senses 48V and switches to active mode, to utilise another of Stealth’s standout features, a built-in professional grade Mic Preamp (which dispenses with the need for an expensive external gain lifting device).

Phantom power is indicated by Aston’s purple LED floodlights, which can be switched off when Stealth is to be heard but not seen, for example in broadcast and video situations.

In another first, Stealth’s mass loaded capsule is completely isolated from the chassis via three hemispheres made from Sorbothane - a synthetic material used in computing and hifi and an acoustic shield and vibration dampener – offering unparalleled internal shock absorption.

The capsule and other vital components are pretty much floating in mid air!

Like all Aston mics, Stealth is built to stand the rigours of professional life with a near indestructible chassis and capsule, and comprehensive isolation of the all-important inner-workings. The four voices are accessed by a flush-aligned rotary switch which cannot be snapped, bent or accidentally moved during performance or transit.

Are you sitting down?

Stealth is already creating a buzz amongst audio professionals and artists spanning studio recording, live performance and broadcast. Their first reaction is astonishment at how Stealth stands up to, and even outperforms, many of the industry’s most revered, and expensive, microphones

Then we get them a chair.

And tell them the price.

The Aston Stealth, like the Origin, Spirit and Starlight before it, is designed for professionals but affordable by all. Four mics in one, covering a wide range of applications, and mastering them all.